Shown above is an English papier mâché table, after restoration.

Upon examination in my studio, most of the surface appeared to be in good condition; a light cleaning and a small amount of inpainting was all the surface required.

There were a few structural issues to address. On the base, one of the legs was somewhat loose, preventing the table from being used. Looking closely, it was apparent that a previous attempt to re-glue the leg had not been successful. In order to remedy this, the leg would have to come off to re-attach it properly. The photos below show the leg as it arrived, and after removal from the column.

After thoroughly cleaning the area, the leg was re-attached.

The other area to consider was the perimeter of the top. Table edges are always vulnerable to impact; with papier mâché objects any accidental collision can crush the relatively soft material, causing delamination of the layers of paper. These areas need to be carefully glued and clamped under light pressure to avoid deforming the shape.

One final consideration: the papier mâché top is attached to a solid piece of wood underneath, which is then hinged onto a small block of wood attached to the top of the column. This allows the top to tilt from a horizontal position (when in use) to a vertical position (when on display). The wood under the top had warped somewhat over time, slightly bending the papier mâché top with it. A decision was made to leave this as is, rather than risk further damage by trying to correct it.

The photo below shows the restored table standing up straight, with the top showing a very slight slant. 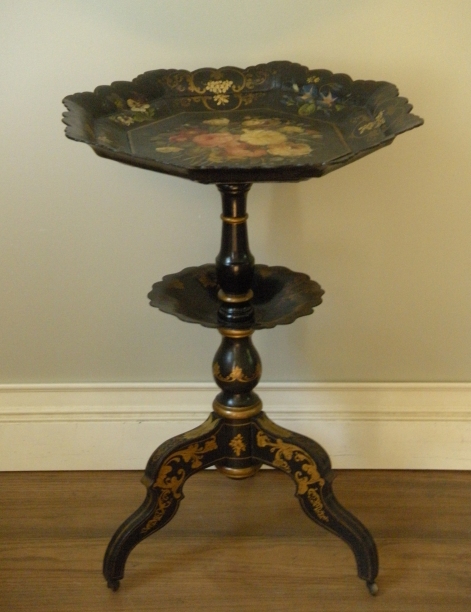